Last night I had my first late afternoon/night out. My partner and I have been out for drinks and left my mum baby sitting once, but last night was my first night ALONE, no baby, no partner. Hallie is now 9 weeks old, so it felt like a good time.

I have spent the last week debating what to wear, feeling fat and ordering numerous outfits, that I now need to return. There is also one added issue now, and that is the guilt of spending money on a new outfit, as I now feel I should be saving it for Hallie. However by some miracle I managed to reach a compromise which was an outfit from Boohoo, that was not only cheap but the material hung in such a way the my baby belly was only visible from certain sitting down angles. knee high boots covered the majority of my legs but helped me feel somewhat more attractive, these were slightly more expensive, but boots (from In The Style) are an investment, so justifiable. 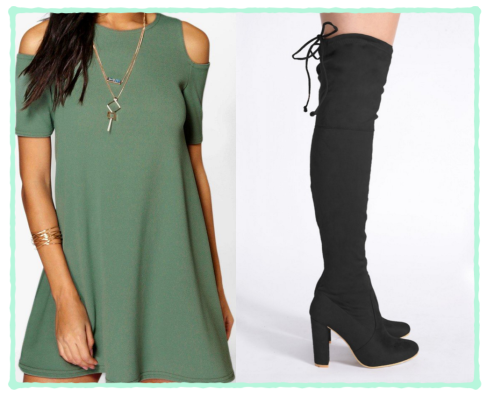 The outing began at 5pm, mainly because I wasn’t sure how long I would last and figured the earlier I went the more awake I would be. This plan worked well.

We decided on Camden, which was great as I could Uber there, I don’t think I have taken the tube since December, which I find really strange.  We also decided on food, which again was a great plan, we didn’t eat much (mainly due to the tiny portions served to us on the 2 courses for £10.95 offer), but just enough to line the stomach.

And we were off!

I should mention that Hallie was at home with my partner, and even though he really couldn’t be a better dad if he tried, my anxiety levels were at an all time high. They rose considerably when my partner informed me that he had taken Hallie to the pub, I admit I may have over reacted slightly, but what is it about men and not being able to stay put. If I was to stay in to take care of Hallie I would do exactly that, but not guys, they need to find something to do as well (FOMO – fear of missing out). This is something I have noticed pre-baby also, and seconded by my friend Rachel;

“Why can’t they just sit in and wait for me like I do when they are busy, as soon as you mention you are going somewhere, suddenly they have found plans”

After the meal we headed to a civilised cocktail bar where we sampled a couple of their best. A band began to play music such as ‘Superstition’ and ‘Message in a Bottle’, and we realised it was all very civilised, and as much as the band tried to step it up by mixing in Nelly’s ‘Hot in Herre’, we needed to move on.

So we did, and we purchased the below… 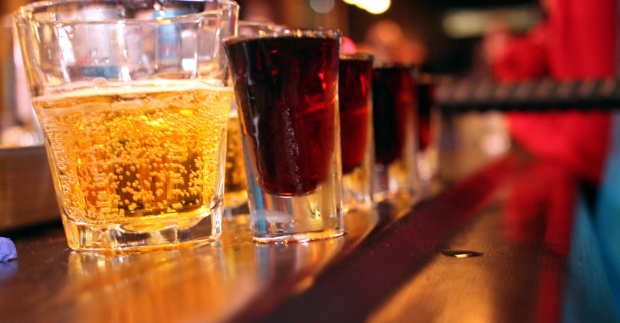 …because it isn’t really a night out without a Jagerbomb (can’t find the weird ‘a’ on my keyboard shortcuts), so after some encouragement from my sister, they were purchased. The downing of them didn’t go completely to plan, as we moved away from the bar prematurely before we secured table space, so we were left standing in the middle of the floor downing them, followed by individually walking up to the bar to place them as we couldn’t stack them.

Anyway, my friend then had to leave, meaning, yep you got it, I was not the first to go home, win. As Rachel left my sister and I admitted it was hard not to talk about Hallie constantly but we didn’t want to be bores. I am in all honestly surprised I had anything else to talk about, but seems I did and it was really great to feel like me again and be with my friends discussing something other than the consistency of my baby’s poop.

It was now at around 9.30pm I had a wobble and needed some comfort that Hallie was OK 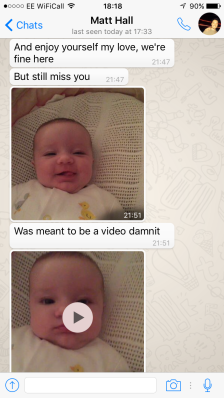 That face! I was nearly ready to run home, and think my sister was too, but we powered on through for a couple more.

We finished the night in one of Amy Winehouse’s old hangouts, which was made weird by a gang of young women dressed as Amy Winehouse. Things got even weirder, when to quote my sister, two girls began to dance like something “out of a Beatles music video”, cheesy as fudge. It was then we knew it was time to call it quits.

After assisting a passed out, drugged up girl in the toilets we ordered an Uber.

We didn’t even enter a take away, instead I messaged my partner to inform him of our return home and he replied to let us know that chips with cheese and garlic mayo would be waiting, what. a. dream. Not only was this the best idea ever, it meant that I could hurry back to see Hallie.

When we arrived home the chips were ready as promised and my daughter was still awake to welcome me home, she was watching ‘Die Hard’, which is apparently a Christmas film, so pretty baby friendly. I can honestly say returning home to them gave me the possibly the nicest feeling I have ever felt, there was a ‘Christmas’ movie on and I had my sister, my daughter and my partner all under the same roof, bliss. Sometimes it’s nice to get out actually, as it makes the return home all the sweeter.

All in all I managed seven drinks and a shot and I stayed out until midnight! I would say that is a pretty great first attempt. This morning I woke up slightly hazy, briefly forgetting I had a baby (which happened a lot in the first few weeks, which is apparently normal), until my foot touched the Next to me Crib, like Scrooge wondering what day it is, and getting the best gift, it’s Christmas day.

I was hazy but definitely not hungover, it really couldn’t have gone any better. Here’s to next time.

She says she’s had a great week. We’ve watched lots of Disney, she’s made lots of crafts over video call with Grammie and they’ve read lots of books together. I’ve enjoyed baking with her, planting seeds and lots of chalking. Daddy has spent his lunchtimes in the garden kicking a ball with her and getting up at 6am together. Tomorrow she has a virtual dance lesson with Auntie Lauren and a quiz with Auntie Emma. I think she is being missed ❤️
Do we look better in Valencia filter? Let’s dance our troubles away, join in @lmhughes93 dance off. Check out her story.
@cloudshed is six years old today! Two sisters. Training the world on cloud apps. One business at a time 🥳 There might be a tough few months ahead but we will try our best to help anyone who needs it whilst keeping our wheels turning. Hopefully see you here in March 2021 #gsuite #familybusiness #smallbiz #birthday #cloud #homeworking
It’s International Women’s Day! If you didn’t know @cloudshed is run by two sisters, we make up our whole business and we do it very well. I would have usually struggled saying that but this year we took part in Google’s #iamremarkable programme and it taught us all sorts of ways to celebrate being strong, successful and confident women. People still don’t realised what it is like living in a woman’s world and if you haven’t already I urge you to watch ‘be a lady they said’ That video shows many reasons (but by no means all) we still have International Women’s Day. Gender bias is a global issue, and sadly not one country has achieved gender parity- just let that sink in, not even our Great Britain and no one is set to in the next ten years! We are remarkable, we will continue to be remarkable #iamremarkable #internationalwomensday #genderequality
Love the idea of pjs on #worldbookday 1. I don’t have to make a costume 2. The book is more important than the costume 3. Everyone can be involved 4. She looks mega cute
Five years for us today. An annoying day for an anniversary but it will be our last one on this date and then it will be 26th July! Extremely excited for our wedding in five months @mrmrhall1 we have a lovely life together and I feel very lucky (most of the time 😉)❤️
Follow disorganisedharmonydotcom on WordPress.com